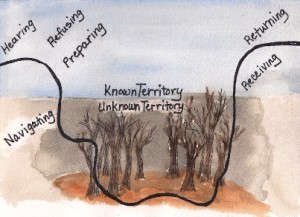 I was 40 years old when I lost both of my parents to cancer, and I started asking all of those questions about what it all means, and what, really, is the purpose of our lives. 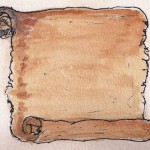 For several years, I had a disturbing series of physical traumas myself, systemic problem that kept recurring. This was the call to my Hero’s Journey, the evidence that something had to change. 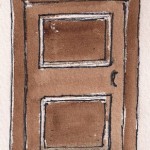 I was hearing the call, but refusing it, which is a classic part of the Hero’s Journey myth.

I knew very well that I wasn’t being true to myself in multiple areas of my life, but I kept putting off dealing with it, because there were so many interdependent moving parts, and I couldn’t see the path for any of them.

I was living in downtown Chicago, which was definitely out of my natural habitat of living intimately with nature.

I was in a long term relationship where I was being someone untrue to myself, and I had known for a while that it was not sustainable.

I was working as a Vice President in a multinational bank, a job for which I was very capable, but which sucked the very life out of me because it was so contrary to my deepest soul’s longings.

In addition, I had just entered menopause in a big way. 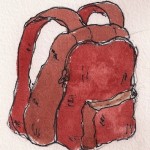 Preparing for My Journey

I wasn’t aware that I was on a Hero’s Journey, but when the physical symptoms became life-threatening, I did the only reasonable thing possible: to begin aligning with my true nature. I looked at my life and decided what to take, and what to leave behind.

I moved from the city to five acres in the country, and started my life over, leaving behind my relationship and my ill-fitting job. 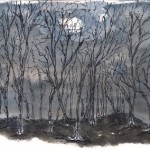 I was forced, by my health issues, to take a sabbatical and tend to my health and vitality first.

Living in the country was a restorative first step, but had its own challenges of isolation. When my health finally improved enough that I could work again, I didn’t know where I was going professionally. There were many things I could do, but few that I really wanted to do.

I had to navigate my way through a lot of unknown territory. 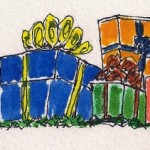 I had always been drawn to a spiritual path, but when I was so far away from my own truth, I didn’t take the time to devote to my spiritual nature.

In the depth of the unknown territory of my transition, I once again became a spiritual seeker, more out of desperation than anything else. Meditation and journaling helped bring some peace to the not knowing of my life circumstances. I began to find my way back to my true self.

I began to hear my authentic inner voice, and instead of overriding it as I had been doing for years, I began to listen.

Returning to My Community

It was by finally accessing, listening to, and following my inner wisdom, step-by-step, that I found my way to my authentic spirit and life.

I found my way back to health. I found my work and true contribution. And I entered into a relationship where I honor, and am honored, for who I really am.

The key to my journey was that I finally found my True Self, and then all of the outer elements of my life began to shift and align with that essence of my true nature.

I didn’t know at the time that I had to find my Self first, and then I could find my way.

Throughout my transition, I was on a journey of challenge and self-discovery.

It was my Hero’s Journey, but I didn’t know it. It was only clear to me at the end, looking back.

If I had known at the beginning, or even in the middle of it, it would have made all the difference.

I thought I was a soul who had profoundly lost her way. The truth was that I was finding my way, and finding my Self, my core essential self.

I was a hero when I thought I was a failure.

That’s why I do this work now: to show women that when they feel most lost, they are on their way to being found.