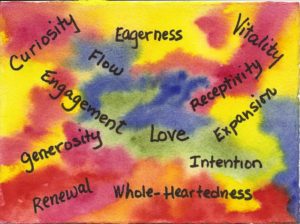 It is difficult for me to believe that we are already 2 full months into 2018, but we are, and so I am doing a stocktake of the 12 Words “project” (don’t know the noun; this one doesn’t feel right).

In January, Curiosity held itself quietly back in the crevices of my mind, and I often forgot about it until I saw my painting of Curiosity in my morning Listening Time.

It was like a shy, reclusive kid who could remain unnoticed without my active commitment to invite her in and pay attention to her.

I tried to create all kinds of different reminders to bring Curiosity into my mind during the day, but she still remained largely unnoticed in the course of my days.

However, I still learned a lot about Curiosity, and I love the sense of awakening that her presence brings into my life.

February’s word, Vitality, on the other hand, demanded my immediate and constant attention.

It seemed to be in my face all the time.

At the kitchen counter, while I was making dinner, Vitality would pop up and say, “Pay attention to me. Who am I?”

I’d ask myself several times a day: “What is Vitality? Where is it now? What does it need from me?”

It is like it pushed its way in, everywhere, and demanded to be seen, invited in, and paid attention to.

It was like once I asked it in, it wouldn’t go away or recede back into the shadows again.

Here is the “last word” (maybe) on Vitality. Maybe, because, now that it has been invited in, it isn’t going anywhere.

I think Curiosity and Vitality will be a big help with Eagerness.

To the extent that I can be curious and allow the flow of vitality in and through me, I am guessing that Eagerness will grow and flourish.

But there will still be plenty to learn and experience about Eagerness, and I am eagerly looking forward to the adventure! 🙂